From TWC Archive
< User:Ccc
Jump to navigation Jump to search
For the WeatherStar XL version of Weatherscan, see Weatherscan Local. For the hardware used to generate the network, see IntelliStar.

Weatherscan (originally called Weatherscan Local) is a moribund sister network offered by The Weather Channel (TWC). Weatherscan features uninterrupted local weather information in graphical format on a continuous loop. All content is produced by a separate IntelliStar unit at the cable company's headend and, unlike The Weather Channel, Weatherscan does not feature on-air talent of any kind.

Weatherscan was once available in many top markets around the United States, though its availability was less than that of TWC. Many cable companies offered Weatherscan on their digital cable lineup, although a few companies provide the channel on their basic cable lineup, on which The Weather Channel is also offered.

A letter from The Weather Channel to the National Content & Technology Cooperative stated the network's intention to discontinue the Weatherscan network entirely on or before December 9, 2022.[3]

Verizon FiOS dropped Weatherscan (on channel 49), along with parent network TWC, from its lineup from March 9 to March 10, 2015, after the two parties were unable to come to terms on a new carriage agreement. The service was replaced by a local WeatherBug "widget" in some markets. No public announcement was made regarding this issue until over 12 hours after the discontinuation. Verizon said thatits reason for dropping such services was because many customers turn to the internet and mobile apps for weather any time of day. This makes Weatherscan widely absent in one of the top 5 markets, especially where cable clusters don't carry this network.

Little has been done to update Weatherscan over the past few years, but was still being offered to cable companies until recently despite this. Comcast (Xfinity) began to drop the channel from its cable systems in October 2017 and fully removed it by December 10th of the same year.

First-generation IntelliStar units as a whole, but especially those remaining in official service that solely run Weatherscan, are beginning to feel the effects of slowly-failing capacitors, due to their motherboards being manufactured during the capacitor plague era in the early 2000s. As a result, most Weatherscan IntelliStar units still remaining in the field are not expected to remain alive in the next few years. To fix this issue would require the recall of all remaining units and installation of new capacitors in each, an action The Weather Channel is unlikely to take.

In late 2021, Wyandotte Connex revealed that The Weather Channel has stopped providing support or replacement Weatherscan IntelliStar units[4] to cable providers, signaling the gradual end of the service, which would later be revealed as occurring in December 2022.[5] The few remaining providers with working Weatherscan IntelliStar units continue to operate them regardless of support status.

When Weatherscan was launched on the Intellistar platform, it received an entirely new graphical design heavily featuring the color blue, with accents around the border varying by segments (yellow for local forecasts, orange for traffic, blue for travel and airport, green for garden and golf, teal for health, purple for ski & snow). The only deviation from this was during "severe weather mode" when an active warning was in place for all or part of the unit's served area. This package swapped blue with yellow accents for gray with red accents.

The main typeface switched from Akzidenz-Grotesk to Frutiger. Background images were changed from a neighborhood scene to a city scene for forecast segments. This graphical scheme re-introduced a title/copyright screen that was unseen since around 2000. The screen features an image of the main reporting site's skyline with "weatherscan" rendered in blue Frutiger typeface. The Weather Channel logo dissolves into the bottom right with the cable affiliate's logo in the upper right opposite the text "Weatherscan is only available on [name of cable affiliate]." This text then dissolves to the copyright tag "© [year] The Weather Channel, Inc. All Rights Reserved." For rural areas, the background image for this screen features a white picket fence in a neighborhood scene.

The entire screen was in a faux-letterbox style, with black bars at the top and bottom of the screen. The top of the screen featured rudimentary observation and forecast data in yellow Frutiger and Frutiger Light font with the cable affiliate logo on the upper right hand portion of the screen. The bottom bar featured the date and time on a blue background above the plain text "weatherscan" logo and next to The Weather Channel logo. To the left of the Weatherscan logo was space for an advertising crawl, which was presented as white Frutiger text. If no advertising crawls were loaded into the system, it simply displayed "Coming Up Next...[next segment]" in yellow. The only exception is again in "severe weather mode" with a red bar appearing just above the crawl space containing the type of warning with NWS warning text crawling under it. To make more space for crawling the warning, The Weather Channel logo would be removed and the Weatherscan logo would be shifted to the right.

This format went largely unchanged for between approximately 2 and 2½ years. 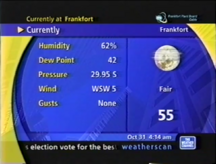 On September 27, 2005, Weatherscan received its last major graphical overhaul. To match TWC's then-current on-screen presentation, the main typeface changed to Interstate. The main panel from the original Intellistar graphics package is reduced to a smaller but still prominent window in the upper middle of the screen, with most graphical elements inside this remaining the same, including retaining the Frutiger typeface. Above this is a horizontal "rundown" bar featuring the current package being displayed and the next 4-5 products coming up.

Around this, an "L-bar" feature was introduced, including non-stop current conditions for the main observation site (with temperature and icon then other pertinent observation data rotating below) and a long-range three-hour radar loop. Next to this is a horizontal bar alternating between a condensed text-based forecast for the current and next daypart, a graphical daypart forecast and a graphical 5-day forecast. On the lower third of the screen, next to the cable affiliate logo (sometimes replaced with logos for advertising businesses) are two crawls stacked on top of one another. The lowermost crawl, featuring black Frutiger typeface on a blue background is an advertising crawl for local businesses. If no businesses advertised, the bar is either left blank or features promotions for programs appearing on The Weather Channel itself. The thinner bar above it features a crawl of local and regional observations and forecasts for the next daypart in white Interstate Condensed font (changed to Interstate Bold in July 2010), as well as local airport observations and delays.

During severe weather mode, the main window still switches to a gray and red color scheme, with the rest of the graphic remaining blue in color. For the duration of the warning (limited to flash flood, severe thunderstorm and tornado warnings), the radar in the L-bar is replaced with an expansion of the current observation data. The main window only shows the metro radar product, alternating every minute with the message "Weatherscan and [name of cable affiliate] bring you this message because of severe weather in your area." The warning text (until 2015, when it was replaced by generic hazard crawls) was featured on a red background replacing the advertising crawl, with the warning product name on the top line. Similar to the Weather Star XL and Intellistar units seen on The Weather Channel, the alert crawl also had a yellow variant for severe thunderstorm and tornado watches and an orange variant for special weather statements (known after 2010 as "weather statements") and any other NWS advisory that was not otherwise covered.

The Weather Channel logo (until April 2016) and the Weatherscan logo (now rendered in blue lowercase Interstate Bold) were featured in the upper left next to the date and time, which were stacked atop one another. The clock also featured seconds for the first time since the end of the XL-era.

Weatherscan has a variety of segments that show different information regarding the weather. Packages are changed each season with no set date, as they are manually sent by Star team technicians. There is no known pattern for when the packages change, as they do not follow the meteorological or calendar start or end dates of the seasons. Cable operators have the ability to customize what packages are shown and as such not all packages are available in all areas. 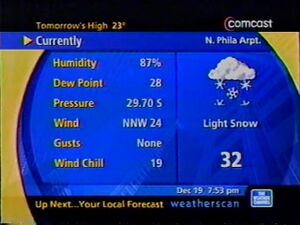 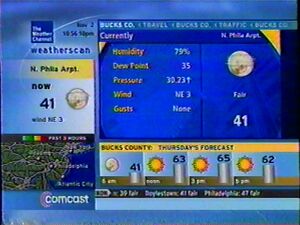 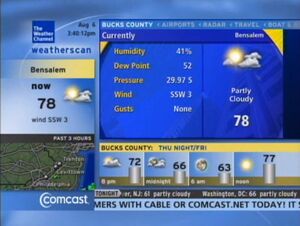 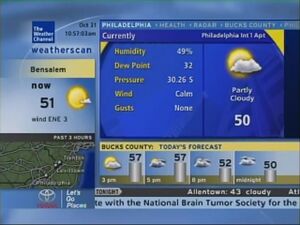 As market demands changed in the field of weather information throughout the middle-to-late 2010s, carriage of Weatherscan has slowly dwindled. The channel is now mostly carried on smaller-to-mid-sized cable affiliates outside of the largest media markets. As of July 2022, these are the providers still carrying the channel, which will be all discontinued on or before December 9, 2022.

*Blue Ridge's units, Ephrata and Mount Pocono, PA, were both discontinued on May 1, 2022.