The WeatherSTAR Emulator Forum, abbreviated as WXEF, was an Internet forum aimed at The Weather Channel fandom that was created as a platform for hosting WeatherStar simulators (often contemporarily referred to as emulators). It most notably hosted a simulator of the initial version of the WeatherSTAR XL version of Weatherscan. The site has been inactive since its owner, BOLT96, made a post detailing that all projects were on hold on September 30, 2014.

Despite the inactivity, the forum is still online. Posts created by spambots are a common sight, however, and users exploring the site should use an ad blocker.

The WeatherSTAR Emulator Forum was created sometime around mid-November 2009. It was advertised on TWCToday, bringing some users from that forum to the newly established site in search of new simulator projects. Over time, new threads were created for each STAR model, from the WeatherSTAR I to the IntelliStar. Many of these threads simply stated that a simulator project had not been started or was in the early stages of development. However, the following threads directly or indirectly had associated simulator projects: 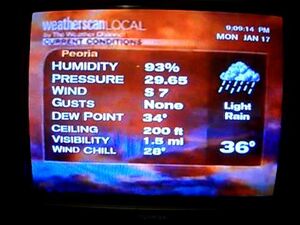 During the life of the forum, the only directly-hosted simulator project on the site was a Weatherscan Local (XL) v1 simulator created by BOLT96, the forum owner. The simulator was released to registered forum users in public beta on September 8, 2010. In order to use the program, one needed to obtain a program key through a direct message. The simulator was a Windows-only program that ran as a .exe file. The simulator relied on the Yahoo Weather API for data, which has since been retired.

Notably, the simulator was advanced for its time in that users with animated icons in AVI format could use them with the simulator. The download links for the simulator are presumably dead, and since the aforementioned retirement of the Yahoo Weather API, the program is, in terms of display of data, nonfunctional. Nonetheless, the program is not lost; some of its users still have archived copies.