The channel was launched in November 1996 within Argentina, initially as a text-and-graphics service; the channel planned to mainly target Mexico, Brazil, and Argentina with Peru and Chile as secondary markets.[1][2] The channel operated from Atlanta, with sales and marketing initially based in Miami before satellites offices were set up in several Latin American countries. Many staff members were recruited from NBC's Canal de Noticias upon its closure in 1999.[1]

The channel started its Portugese-language version in 1998, where it competed with a Brazilian-owned TV service, TV Climatempo, which continues to operate to this day.[3][4]

As market research determined that Latin American consumers were not well-versed in meteorological science, programming that focused on weather education was added to the schedule. The channel also faced technical issues with delays to the Weather Star XL, which limited advertising revenues, as well as issues getting onto cable networks where capacity was almost full.[1]

On December 20, 2002 the network closed the channel to avoid cost cuts at its American operations. 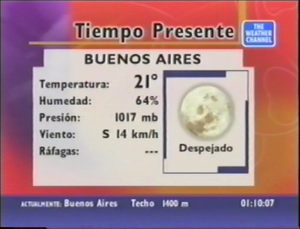 Screenshot of a local forecast segment from 1999.

The Latin American version of Local on the 8s, generated on the Weather Star XL platform. Forecasts aired every 10 minutes on the "0s" on the Spanish version and on the "5s" in Brazil. The length of segments is uniformly two and five minutes respectively. Some of the music used for these forecasts ended up playing on Weatherscan operated by The Weather Channel in 2003.

Cable viewers received a segment consisting of current conditions for local and regional observation sites, satellite images of the area, one-day and three-day forecasts for regional cities, and a solar and lunar almanac.[6] Satellite viewers would see forecasts for all of Latin America, or of certain nations.[7][8] If conditions warranted, a special screen would appear at the beginning to warn of severe weather conditions.[7][9]