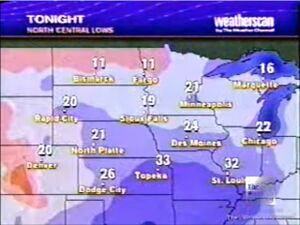 When Weatherscan Local debuted in 1999, there was also a national version of the channel that was used for satellite companies and smaller cable companies that could not afford Weatherscan Local. This channel featured current temperatures and the forecast for the next several days for select cities throughout the United States, as well as national and regional radar images. This channel was named simply "Weatherscan". This feed was pulled by most headends in 2001, and was discontinued by 2003 with the roll-out of the IntelliStar platform. [2]