Launched in April 2016, We Love Weather serves as a fan community website for The Weather Channel's television operations, allowing fans to read articles created by We Love Weather staff and view user-submitted photos and videos. Formerly, the website also was home to a forum targeted at meteorology fans.

The site is still publicly accessible but is currently inactive, with no new content on the website since January 2021; the closure of the forum came soon after in February of the same year.

We Love Weather was created in response to the sale of the weather.com domain to IBM.

On April 25, 2018, the first episode of Weather Geeks, a fan-oriented podcast based on The Weather Channel's former television program of the same name, was uploaded to the site.[2] The site is technically the official home of the podcast, but new episodes have not been uploaded to the site since December 23, 2020.[3] The podcast continues to be available through major podcast platforms like Spotify and Apple.

Upon launch, We Love Weather came with a weather community forum, which was billed as a "community created for those that love the weather as much as we do." The forum, as a forum targeted at TWC viewers, became the third existent forum for fans of The Weather Channel at the time, the others being TWCToday and Taiganet. This was not the network's first foray into forums; TWC had previously delved into the world of forums with a Compuserve forum called TWCFORUM in the mid-1990s[4], and it had established an official presence on the fan-managed TWCToday forums in the late 2000s to early 2010s. The forum's main home page served as a section for general weather posts, while other sections existed for weather questions ("Community Q&A"), introductions by new users ("Introduce Yourself"), and suggestions for the website ("Site Suggestions").[5]

The forums were mostly used for their intended purpose, with daily activity by regular users reflecting interest in day-to-day weather conditions and questions. However, near the forums' retirement, some posts became outlandishly off-topic, the most unusual reflecting a controversy in which a user became offended by another user's profile picture depicting a cereal box.[6] This controversy, which began in 2019 and continued until the retirement of the forums, led to the creation of alternate accounts and forum spam. Regular users of the forums became irritated at this behavior and petitioned for moderator intervention, which was relatively uncommon. In a somewhat similar vein, viewer complaints over changes to the network were swept under the rug by staff members, who, if they responded at all, would respond with messages praising said changes, justifying them, or effectively telling forum members to deal with the changes as a new normal.

On January 7, 2021, We Love Weather's forums were set to be viewed by signed-in members only. By February 1, 2021, they became fully disabled. This action left the TWCToday and Taiganet forums, once again, as the two remaining forums for Weather Channel fans.

On November 23, 2017, a charity auction known as "Forecasting Hope" opened to the public on the We Love Weather website.[7] Through the course of the auction, items such as signed memorabilia, clothing items, personalized weather forecasts, and even video sessions for classrooms with meteorologists were made available to prospective bidders. As a result of the auction, $66,678 was raised for organizations such as the American Red Cross and Save the Children which provided aid to victims of that year's natural disasters.[8]

Despite the closure of the community forum, once considered the primary selling point of the site, as well as inactivity on the podcast section of the website, the site is still publicly accessible. However, no new articles have been posted to the site since December 30, 2020. The last video uploaded to the site was uploaded on December 18, 2020. Around the same time period, the social media accounts of We Love Weather became inactive. User-generated content on the site has also grinded to a halt, with the last user-submitted photo on the site having been posted on January 6, 2021.

The site's forums were home to a variety of conflicts between representatives of The Weather Channel and viewers over planned changes on-air. The most notable instance occurred when, in April 2018, The Weather Channel introduced "Local on the 8s" segments that displayed on the network's lower display line (LDL) rather than in full-screen segments, cutting down the number of true local forecast segments down to two per hour. The thread in which the network announced this change very quickly became the most popular thread on the forums, thanks to the large wave of negative reactions that followed.[10] 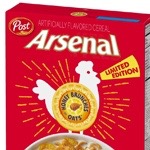 Beginning in 2019, a feud between two users, ArsenalFan and AndyMoserWeather, over the latter's profile picture—a cereal box with the logo of the English football club Arsenal superimposed on it—littered the site's community forums with threads in which the two sparred, sometimes dragging other users into the fighting. This behavior continued throughout the life of the forums until their retirement.

The fighting between the two began on June 30, 2019, on the previously mentioned thread about changes to the timing of Local on the 8s. In the weeks that followed, threads began to be posted in which the two attacked each other, such as one named "ATTN: Irrefutable proof of ArsenalFan and his affiliation to the left! He is a liberal!" ArsenalFan in particular was notorious for using highly offensive language on the relatively unmoderated forums. The profile picture became the center of the conflict when AndyMoserWeather uploaded it on July 6, evoking a response from ArsenalFan, taking it as an insult to the football club. The fighting continued for months afterward, with heated threads such as "LADIES AND GENTLEMEN OF WE LOVE WEATHER, ARSENALFAN WENT TO SLEEP" popping up. Moderators would delete many of these threads; however, this did little to stop the disputes. ArsenalFan changed usernames later in the year to FooFighter, and later, AndyMoserWeather joined on a new account named Mesocyclone. Both users also made threads and posts asking moderators to ban the other's account. The fighting continued throughout 2020. Thread titles from this time period included "Mesocyclone and DonaldTrump," "Since Haley is not deleting my cereal box," and "Delete Mesocyclone," all of which were found in the site suggestions section of the forum. In September 2020, ArsenalFan/FooFighter posted a thread recommending that users not join We Love Weather, bashing moderators and ranting about the controversy.[11] Posts pertaining to the profile picture continued until the end of the forums in early 2021.

The controversy was notorious for producing threads that could be seen as unappealing for new users. Many of the threads associated with the conflict were posted in completely unrelated forum sections, and many posts outside of the aforementioned threads dragged in users who had nothing to do with the disputes between ArsenalFan and AndyMoserWeather. Users requested that moderators intercede amid the chaos, but moderator actions were hard to come by on the forums and easily bypassable. Ultimately, the controversy is remembered by many as one of the oddest aspects of We Love Weather.