The IntelliStar 2 HD (Known internally as "I2 HD" or colloquially just referred to as the "I2") was the high-definition successor to the IntelliStar. Like previous iterations of the WeatherStar system, the unit is installed at each cable provider's headend. This system was the first one to output in 1080i high-definition. 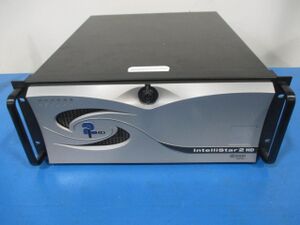 The IntelliStar 2 HD follows the design of the IntelliStar, as the system is a custom built rack-mount PC. The I2 HD runs on Windows XP Embedded, and the software running the back end operation of the unit is a combination of high level software written in C# / F# by The Weather Channel. Graphical creation and rendering was created using software from Vizrt, mainly Viz Artist for design and Viz Engine for rendering. Attempts were originally made to outsource hardware creation for the unit, but was moved internal after the outsourcing company failed to produce results.[4] Custom cards were created to enable to hardware MPEG-2 encoding and decoding of the satellite video signal from the satellite, and the complete local feed sent to the local cable plant.

Hardware used in the IntelliStar 2 HD[5]

The IntelliStar 2 HD's graphical layout for the "Local on the 8s" segments features the product that is being shown at that time (see Current Products) in a main window on the left two-thirds of the screen, with The Weather Channel and "Local on the 8s" logos above it, attached to a box showing the name of the city and the current time. Below the main window and ad crawl is a small, rundown-like list of products currently being shown and expected to be shown (up to four products are listed); this list includes a progress bar that represents the length of the segment, filling the longer a product has been displayed. Next to the list is an icon related to the product being shown in the main window (for example, a thermometer for current conditions or a radarscope for radar loops).

The Lower Display Line displays the current weather conditions and the forecast for the next five days for up to four cities in the area (including the local observation site) on the LDL; the accompanying sidebar shows additional products displayed within a "dial" at the center right, with a similar rundown list appearing below it (the rundown appearing on the top right of the sidebar is available to all providers and is not covered by the IntelliStar 2-generated sidebar). Since The Weather Channel began displaying weather data full-time on November 12, 2013, the Lower Display Line appears throughout during all programming (having been removed during commercials and long-form programming on all STARs previously; it continues to disappear entirely during local advertising breaks on many cable systems), while the sidebar is removed during commercial breaks.