The Weather Channel United Kingdom was a version of the Weather Channel that operated in the United Kingdom from 1996 to 1998. Operated by IWP, the commercial arm of the UK's Met Office, it aired on the Sky satellite platform from 6 AM to 11 AM (its channel space was shared with The Racing Channel and Sky Box Office) and on some cable providers 24 hours a day.[1]

The channel launched in June 1996, spurred by reports that Pelmorex would enter the European market; a localized version of The Weather Network was planned for launch a month before the Weather Channel's.[2][3][4] Initially, the channel was launched in cable services in Andover, Coventry, Oxford, Salisbury, and Stafford, reaching 22,000 cable customers.[3] The channel competed with the Pelmorex-operated Weather Network until the two services merged later in the year,[5] the channel started carriage on Sky's satellite service on October 1, 1996.[6][1] The channel's managing director Peter Scott said that the channel would take three years to break even.[7] Low cable penetration in the United Kingdom and the lack of advertising revenue (stemming partially from its failure to get full time coverage on Sky) resulted in the channel's closure in 1998.[2] 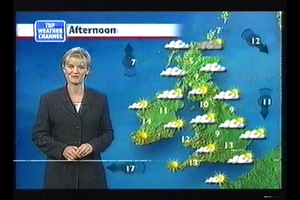 The Weather Channel in Europe: