The Weather Channel fandom is an international, informal community of fans of the American digital cable and satellite television network The Weather Channel. This community began to come into existence with the advent of the Internet and the rise of forum websites, such as the TWC Classics community forums, now defunct, and the TWC Today and Taiganet community forums. The fandom continues to be a mainly online phenomenon, most recently expanding into instant messaging platforms such as Discord.

Set to be expanded.

The first attempt by the network to build connections with its viewers was in 1995, with the launch of a CompuServe forum called TWCFORUM, also known as "The Weather Channel Forum".[1] This forum provided a space for the network's meteorologists and fellow weather fanatics to have conversations about weather topics.[2] Additionally, users could talk among themselves, visit a forum library to learn about meteorological topics, view tips for weather safety, and view images of historical weather events.[3] However, the forum began to decline in its later years, with off-topic posts and arguments among users, combined with a minimal presence of administrators, causing its downfall.[4] 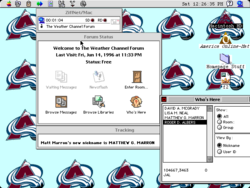 A screenshot of CompuServe TWCFORUM.

Soon after, an early form of TWC Classics, at the time a website focused on the channel's music selection, was founded in the summer of 1997 by Matt Marron.[5] The following year, the site expanded to cover more aspects of The Weather Channel and even became a reseller for independent artists' music. Charles Abel-Lear (The Weather Chazz) joined Matt's project in the early 2000s, helping to develop special events, designing recreations of WeatherStar 4000 graphics, and rebranding the website to its current name. Their combined efforts got the attention of many new fans and The Weather Channel itself, leading to the WeatherStar development team using some of the site's members as beta testers for their new IntelliStar technology in 2004.

The Weatherscan XL simulator, today hosted on TWC Today, had its beginnings in the early 2000s.

Around 2004, the Weather Star 4000 simulator project launched on an early version of the Taiganet website.

Not long after YouTube was launched in 2005, it would attract fans of The Weather Channel, who set up channels on the website to cater to the growing online community presence. They would upload footage of the network, especially local forecast segments and footage of major events covered by the network. Some others, including Charles Abel-Lear, would go on to create channels largely devoted to simulated versions of the local forecast, including uploads of the Weatherscan XL and WeatherStar 4000 simulators.

TWC Today was established in 2007.

The popularity of TWC Today among fans extended also to The Weather Channel, much like TWC Classics. The WeatherStar development team would establish a presence on the forum, operating what was effectively an officially sanctioned technical support contact section of the forum. On-camera meteorologists and other employees of the network would also make a home there, followed by many of the musical artists featured on the network.

The mid-to-late 2010s saw the rise of online communities that contrasted with the traditional forum format associated with the fandom. The first major community of this kind was The Weather Chat, which begun on Kik around 2015. The group soon moved to Telegram and continued to exist there until October 4, 2017, when it transferred to Discord, which was still a young platform at the time. The group would transform into the wxTV Studios Discord server, which remains one of the most popular and active community groups to this day, boasting over 200 members. The transition to wxTV Studios coincided with Discord's explosion in popularity. After the end of The Weather Chat, other personalities would launch their own Discord servers to catch up with the platform's takeoff, such as Intelliguy, TWCKelby, and Triple C TWC, all of whose servers became affiliated with wxTV Studios. TWC Today would even go on to launch its own Discord server as a means for offering support for its Weatherscan XL simulator.

In April 2016, The Weather Channel, in the wake of the sale of its weather.com domain to IBM, launched a new website, We Love Weather, which was aimed toward its fan community and the weather community as a whole. Somewhat similar to the concept of TWCFORUM, the site features news stories, quizzes, a photo gallery for users, videos, and formerly, a community forum. The forum was primarily a space for general weather conversation, with additional spaces set aside for weather questions, introductions by new users, and site suggestions. The forum was similar to TWCFORUM in other, more unfortunate ways, however. Like said forum, We Love Weather's forum became plagued by controversies, arguments, spam, and off-topic posts, with moderators often taking little to no action against it. The retirement of the forum, which fully went into effect by February of 2021, once again left TWCToday and Taiganet as the only dedicated forum sites for the community. We Love Weather continues to exist, albeit with few remaining ways for community members to interact.

The scope of many major fandom YouTube channels has focused from simulations of WeatherStars to actual units, most exemplified by the monumental effort to reverse engineer the WeatherStar 4000 in the late 2010s.

Set to be expanded.

While an overlap exists between The Weather Channel's fan community and fans of meteorology in general, some fans of the network are exclusively interested in the network's technology, news presentation, or graphic design.

While The Weather Channel is currently an exclusively American television network, it did in the past reach international audiences (such as in Latin America), and as such, it has managed to gain a small international following.

The modern form of The Weather Channel's fandom has begun partially moving to instant messaging services such as Telegram and Discord, with the fandom's increasingly younger audience preferring these platforms over traditional forums. The TWCToday and Taiganet forums, despite this recent trend, continue to see somewhat frequent activity; however, this trend partially led to the decline and eventual retirement of the We Love Weather forums.

Over the years, The Weather Channel's fandom has published copious amounts of content online, of various kinds.

Simulators of The Weather Channel's WeatherStar technology, sometimes erroneously referred to as "emulators," have existed online since the early 2000s. The first major project was the Weatherscan XL simulator, still supported on the TWCToday forums.

Fan art, mock-ups of on-air graphic elements, and other design projects have been associated with the fandom from an early point in its history.

The largest collection of fan art pertaining to The Weather Channel is that found on the TWC Today forums, with a large forum category dedicated to this work that goes back to the forum's founding in the late 2000s. Much of this work is still accessible, but because of issues over time (image hosting platforms dying off, corruption to files, etc.), some of it has been lost.

The fandom has produced a staggering amount of content for YouTube related to the network, including fan-created content and archived recordings. Recordings of local forecast segments have always been particularly popular, but especially prior to around 2012-2015, a period when network changes drastically reduced the length, music choices, and graphical uniqueness of local forecasts across the country.

Milinoket Cabbl, a YouTube series by fandom personality Triple C TWC, begun as a skit in a WeatherStar XL video on that channel in 2016. Initially a way to poke fun at a cable company's mishandling of an XL, the skit soon spun off into its own full-length entity.