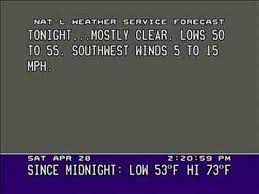 The WeatherStar I in use.

WeatherStar (sometimes rendered Weather Star or WeatherSTAR; "STAR" being an acronym for Satellite Transponder Addressable Receiver) is the technology used by American cable and satellite television network The Weather Channel (TWC) to generate its local forecast segments (currently known under the brand Local on the 8s) on cable and IPTV systems nationwide. The hardware takes the form of a computerized unit installed at a cable system's headend. It receives, generates, and inserts local forecast and other weather information, including weather advisories and warnings, into TWC's national programming.

The primary purpose of WeatherStar units is to disseminate weather information for local forecast segments on The Weather Channel. The forecast and observation data – which is compiled from the National Weather Service, the Storm Prediction Center and The Weather Channel itself (which began providing forecasts for TWC in 2002 that replaced the National Weather Service's zone forecasts used in the STAR's descriptive forecast product) – is received from the vertical blanking interval of the TWC video feed and from data transmitted via satellite; the localized data is then sent to the unit that inserts the data and accompanying programmed graphics over the TWC feed. The WeatherStar systems are typically programmed to cue the local forecast segments and Lower Display Line at given times. The units are programmed to feature customized segments known as "flavors," which are pre-determined variables in the products displayed during each local forecast segment; this allows certain types of products to be added or removed from the segment depending on the time of broadcast (with the extended forecast usually being exempted from removal), and also allows the reduction or extension of the segment lengths. Flavor lengths previously varied commonly between 30 seconds and two minutes, with some running as long as six minutes during the late 1980s and the mid-1990s; in April 2013, the length of these flavors was changed to a uniform one-minute span.

Outside of the regularly scheduled full-screen graphical segments, weather data is also inserted over the channel's national feed via the Lower Display Line (LDL); the LDL was originally displayed as a text-only overlay over the bottom third of the video feed on older STAR units up to the Weather Star Jr. model, containing no graphical background and only showing current weather observations and monthly precipitation totals for the chosen reporting station (the text LDL was removed when The Weather Channel added an LDL specific to the national feed on March 11, 2010). A semi-translucent background was introduced to the LDL with the release of the Weather Star XL, which added local weather forecasts; the IntelliStar later added air quality indexes, travel forecasts for three cities in the region, traffic information and almanac data among the products it displayed. The LDL used on IntelliStar units was redesigned on November 12, 2013, and began to appear throughout all programming on the national feed (including commercial breaks and telecasts of its long-form programs), while being replaced by a segment rundown/progress bar on the full-screen forecast segments. A sidebar was also paired with the LDL on the right third of the screen, visible only to those watching the channel's high definition simulcast feed, which generates supplementary data (including average delay times for area airports; visibility, dew point and barometric pressure data, which was previously shown on the LDL; air quality forecasts; and almanac data); unlike the LDL, the sidebar is removed during commercial breaks and is only shown during the channel's forecast programming.

All STAR systems are able to display watches, warnings and advisories issued by the National Weather Service and the Storm Prediction Center for the immediate area where the WeatherStar system's headend is based, which generate a tone as an audible leader to the alert message. Older STAR units up to the WeatherStar 4000 displayed NWS bulletins in the form of a full-screen vertical scroll with differing colored backgrounds (brown for advisories and red for warnings), which was paired with the Lower Display Line. However, the 4000 introduced a horizontal ticker that was restricted to the bottom third of the TWC video feed; since November 12, 2013, IntelliStar models now display alerts over the national feed's headlines ticker placed above the LDL. Test alerts are also generated that are viewable only by cable company technicians performing silent remote administration tests.

The systems are also capable of generating multiple scrolling text advertisements that appear at the bottom of the screen during local forecast segments, which are programmed into the administrative menus by a locally based technician employed by the provider. STAR units are also capable of generating advertising tags for overlay on national advertisements seen on the national feed, displaying localized addresses for retailers, and on newer models, tagging products seen during breaks (such as pollen reports).

Since its introduction at TWC's launch in May 1982, several generations of the WeatherStar have been used. As of 2015, two STAR models (the IntelliStar 2 and IntelliStar 2 Jr.) are currently being used by cable and IPTV providers for generation of local weather information on the channel.

The original WeatherStar system, the Weather Star I, was released upon The Weather Channel's launch. Like subsequent WeatherStar units, it received local weather data from TWC and the National Weather Service, via data encoded in the vertical blanking interval of TWC's video feed, as well as receiving extra data from a subcarrier transmitted above TWC's video and audio signals on its transponder on satellite. The Weather Star I was manufactured and developed for TWC by Salt Lake City, Utah-based Compuvid. A couple of years before TWC was founded, Compuvid had already made a similar product which was installed at the headends of cable television systems owned by TeleCable Corporation, a subsidiary of Landmark Communications, TWC's corporate parent at the time and the channel's founding owner. This system displayed weather conditions, forecasts and announcements via a set of weather sensors locally installed at the cable headend. The Weather Star I was an updated version of this unit, receiving data from both The Weather Channel and the National Weather Service.

The Weather Star I, like its two subsequent successors, lacked the ability to generate graphics and was only capable of displaying white text on various backgrounds: purple for the "Latest Observations" (which displayed current weather conditions for the nearest reporting station and others within a 75 miles (121 km) radius of the headend location) and "Weather Information" (which displayed random data, usually weather-related trivia, past weather events in the area, or information on upcoming programming) pages, grey for the "36 Hour Forecast" page (a descriptive forecast using the National Weather Service's zone forecast products), brown for scrolling weather advisories, and red for scrolling weather warnings. Until the release of the Weather Star III, The Weather Channel used a single one-minute local forecast sequence featuring each of the three above-mentioned forecast screens. As with all future WeatherStar models, the Weather Star I could key its text over TWC's national video feed, most often to display the current conditions at the bottom of the screen.