Weather Star, also rendered WeatherStar or WeatherSTAR, is the name given to a series of computers utilized by The Weather Channel for the distribution and display of localized weather forecasts for communities across the United States. The primary purpose of Weather Star computer units is to display a graphical presentation of local weather data during the channel's Local on the 8s segments, although Weather Stars also display weather alerts and additional information attached to on-air commercials. STAR is an acronym for Satellite Transponder Addressable Receiver, in reference to the method (via satellite) in which it receives weather data and is controlled in the field. 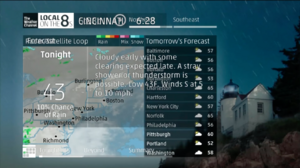 The Weather Channel, as a national broadcaster, distributes its signal to cable companies across the country. Because forecasts for major cities across the country are displayed on the national video signal (both on the lower third of the screen—the lower display line or LDL—and Local on the 8s), the network needed a way to display localized weather information, including alerts, in each location in the United States with a cable television company — this is the function of the Weather Star. Within the cable system, a building known as a headend, a Weather Star sits between and is connected to a satellite receiver (receiving The Weather Channel's signal) and a modulator, a device that turns the audiovisual signal into a proper cable channel.

The Weather Star is not responsible for the creation or generation of weather data; rather, it simply receives data from a given source (such as the National Weather Service or The Weather Channel itself) and displays it over the national video feed of The Weather Channel. This can result in unusual data display issues if an incorrect value is sent, as was what occurred on October 13, 2015, when many viewers of the network noticed that the overnight temperature for their area was “forecasted” to be 999°F — in actuality, this was a data error intercepted by local Weather Star units.

Well before The Weather Channel was launched, the need for localized weather conditions in areas receiving the network was realized. The developers of the network gave the task of developing a device that would display local weather information at a cable company to Compuvid in mid-1981. By the end of December of that year, the company had devised a prototype; however, representatives of the network deemed it unacceptable, causing the device to remain unfinished for some time prior to the launch of the channel. The finished product was the original Weather Star (Weather Star I), which would be upgraded over time due to severe technical difficulties. Some of these difficulties included garbled text on screen, individual text characters taking up large portions of the screen, and even a radiation leakage that affected VHF channel 2 in some cable systems. As time went on and more upgrades were completed to solve these issues, the Weather Star I became the Weather Star II, and eventually, in 1986, the upgraded Star II was renamed the Weather Star III, which would be used by some cable systems until its retirement in 2004.

For more information, click on the individual article links for each model.

The following is a brief overview of the different models of Weather Stars that have been produced over the years. This section is a work in progress.

Advances in computing technology allowed for the development and release of the Weather Star 4000 in 1990. The 4000 was a significant improvement over the III, being capable of advanced graphical weather data displays for the time utilizing weather icons, maps, and radar data. The Weather Star 4000 remains one of the most recognizable Star models, being well-known for its vibrant blue and orange color scheme during local forecast segments.

The Weather Star Jr. was a model of the Weather Star marketed to cable companies that could not afford the more advanced models, released in 1994. It was similar to the III in capabilities, being text-based and relatively rudimentary in this regard. Notably, unlike the III, it did not have the innate ability to generate audio alert tones during weather warning messages, which led to the release of a corresponding alert tone generator, the Weather Star Jr Audio Weather Alert, in 2002 after a ruling from the Federal Communications Commission requiring audible tones accompanying emergency bulletins.

The Weather Star XL was an advanced model for the time when it was released in 1998, being based off the Silicon Graphics O2 computer, a workstation largely meant for multimedia work. The XL was a major improvement in graphical video display, with the capability of displaying millions of colors, highly detailed maps, detailed animated icons, photographic images, anti-aliased fonts, and animation sequences used for backgrounds, among other features. It also introduced audible narrations introducing various forecast products such as the current conditions screen and detailing forecast information on the three-day extended forecast, a narration system known as Vocal Local.

The original IntelliStar provided major advancements at the time in the network's ability to generate forecast presentations.

The IntelliStar was another major advancement in graphic display and localization when it was released in 2003. An Intel CPU-based PC running FreeBSD, the IntelliStar was capable of rendering its own 3D shapes for backgrounds and animating on-screen elements as needed. It introduced many new products seen on Local on the 8s, such as school day and outdoor activity forecasts. It also dramatically improved upon the Vocal Local narration capabilities of the XL, sporting a large system of individualized narrations for individual weather conditions, temperatures, and wind speeds.

When The Weather Channel was preparing to transition to high definition in the late 2000s, the need for a new HD-capable model of IntelliStar was realized. The IntelliStar 2 HD was the first in the IntelliStar 2 line, followed by the Jr. and xD. Windows-based PCs, with the newer models running on more modern hardware, the IntelliStar 2 models are capable of much more advanced live 3D graphics rendering compared to the IntelliStar.

The IntelliStar 2 xD is the current high definition Weather Star model, although it also has the ability to produce a standard definition signal using a letterboxed 16:9 ratio version of the national video feed. It was released in 2014 as a streamlined replacement for the aging IntelliStar 2 HD. It is a fully digital system, with no analog video inputs or outputs.

The following is a gallery of on-air graphics generated by Weather Star systems for Local on the 8s. The list is ordered, as best as possible, from oldest Star to newest.