List of unusual on-air phenomena on The Weather Channel

The following is a listing of documented anomalies that have occurred on The Weather Channel. The channel, as a television network that must utilize live coverage of weather events, is particularly susceptible to a variety of issues that can affect its broadcast. This list is divided into a section for national anomalies, which originated on the part of The Weather Channel itself, and local anomalies, which originated either on part of the local cable company's WeatherSTAR system or the cable company itself. 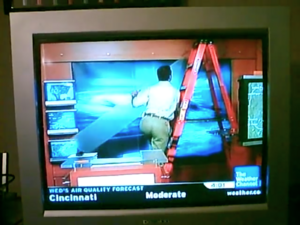 Setup of the Hurricane Central studio, broadcast by mistake in the Cincinnati area due to an IntelliStar error.