The 2013 Rebrand (known internally as "Enhanced" or colloquially referred to as "Weather all the Time" and often shortened to "WATT") was one of The Weather Channel's major rebrands. Commissioned and pitched in early 2013, The Weather Channel contracted Trollbäck+Company to create a new brand identity and visual system.[1] The 2013 Rebrand launched on November 12, 2013.

This rebrand brought a new unified brand identity to The Weather Channel with a modern feel that included new typefaces, new local and national graphics, and new studio sets.

The Weather Channel partnered with Man Made Music to produce a completely new and original music package for all its shows, and Local on the 8s. The producers and composers of individual tracks are largely unknown. At the original package launch, music was created for the live shows Morning Rush, Wake Up with Al, and Weather Center Live. A seperate track was also created for the channel brand anthem. For live coverage, a severe weather music package was developed for any severe threats affecting a large part of the viewing area. A separate music track made for Weather Center Live is saved for non-threatening snow events.

Local on the 8s

At launch, only two tracks were created for Local on the 8s, called Clouds May Come and Tomorrow's Sunrise. Both tracks used are 60 seconds, but videos demoing the rebrand before launch show there is an unused 90 second variant of Tomorrow's Sunrise. On September 18th, 2014, more tracks were added to the Local on the 8s due to viewer feedback about the lack of variety. Most of the tracks are the themes for other shows on TWC, but one or two tracks are from an unknown source. One last track was added in January 2015.

As an extension to the live graphics used on air, all IntelliStar units received an upgrade to match the new look. This upgrade did not extend to the legacy WeatherStar units in service, which retained the look that had been present since the mid 2000s. As part of the new "Weather All the Time" motto, the IntelliStar LDL is displayed 24/7, including during longform programming. Polygon Labs completed the Vizrt implementation on the IntelliStar 2.[2] It is unknown if they also completed this integration for the national graphics presentation. 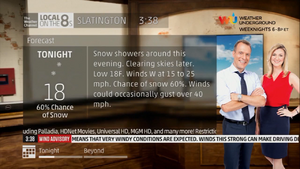 The redesigned local forecast with a promo for Weather Underground

The icons were changed to the flat style that are used on the live programming graphics, with the product boxes also following the same style. The main background of the forecast was also changed, now featuring a randomly picked assortment of nature backgrounds. Starting in 2014, these backgrounds were mainly replaced by network promos and advertisements paid for by other companies. Radar maps were changed from the previous topographical style, to a flat off-gray base map. At launch, city labels were overlaid on the map as plan text, but a refresh in 2014 added white boxes around them to improve readability.

A bar showing the segments coming up next was also added to the bottom of the screen, showing the upcoming product and a progress bar count down until the next product is on screen. The beginning of all local forecasts now feature the new sonic Local on the 8s chime added to the beginning of the forecast. To go along with it, a "Local on the 8s" logo animates on screen, along with a randomly picked one-liner joke. As an additional part of the channel branding, the instrumental music and vocal music tracks were replaced by production music produced for The Weather Channel.

As TWC decided to keep the 1 minute forecasts that they had officially switched to over a year prior, the products displayed during the forecast was reduced, and scheduled the same across all IntelliStar units. The products were reduced to the following: 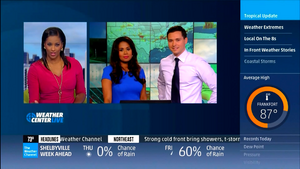 The LDL was redesigned to follow the on air graphics, showing constantly during live programming and longform. On air received a duplicate of the LDL on the national video feed, taking up the bottom of the screen under the live video. The presentation adopted the use of Akko Pro as a fontface, and the blue gradient. Local weather data from the viewing area of a cable headend is displayed, consisting of anywhere between 3 to 8 cities depending on the configuration of the unit.

Additional products were added, marking the return of traffic products, air quality, and pollen information to the LDL. Additionally some MSOs, such as Time Warner, had a special message displayed on the LDL advertising the provider's mobile TV app. The clock on the unit, cycles between the current time, and current temperature for the primary Star location.

On HD, a half height local sidebar was added to provide additional information besides what was already on the LDL. This displayed only over the lower part of the national sidebar, leaving the rundown visible for all viewers. Later limited to just radar and the sun/moon phases, the product originally launched covering a range of information such as airport delays, holiday countdowns, tides, precipitation forecasts, and more. Originally, the local sidebar had its own up next area, but this was removed in 2015. The local sidebar was largely discontinued in April 2018, when it was only being shown during the live programming "Local on the 8s" segments. 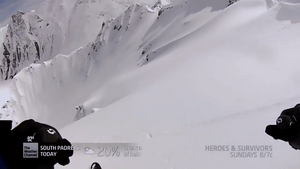 The longform LDL on an I2 HD

Alert crawls no longer cover the LDL on both platforms, now consisting of a single line crawl that appears on top of the LDL. Later revisions of the graphics moved the alert crawl from being placed above the national crawl, to completely covering it. This change also resulted in the clock and current temperature box being displayed along with the crawl. The crawl consists of a red box on the left with the alert type, and the alert contents crawled next to it. To comply with FCC regulations, all alert crawls are read off by a TTS voice on the unit and played on the SAP audio channel.

Longform programming received a shorter LDL size, with a less intrusive transparent gray background. To make sure that graphics didn't impede on the visibility of content, the local content would only take up two quarters of the screen at most. As full screen forecasts were limited during longform programming, a LDL based local on the 8s was shown, quickly rotating through the cities normally displayed on the LDL. A "Local on the 8s" logo was overlaid on the LDL to signify the difference. On SD platforms, the blue gradient background from live programming was shown nationally underneath the longform LDL.

Additionally, with the 2013 rebrand came a new Storm Alert Theme for Local on the 8s and specialized graphics during large weather events. The rebrand also brought new on-air variants of graphics. The original lower thirds had a darker blue text background color. During large events, the show logo's would change color and have a black text background. The new lower 3rds (released Mid-2015) allow for 2 lines of text and large show logos. The text was normally black over white but during large events such as hurricanes, the text would be changed to red over the white. As well, the new lower 3rds allowed for larger banners such as "Severe Storm Central", and hurricanes etc. During tropical events, The Weather Channel displays a sidebar with tropical information while on-air and during commercials.[3] During severe weather, The Weather Channel would have a header branded as "Severe Storm Central" or an outlook map with text overlaid on top, as well they may have a slideshow below it showcasing TOR:CON's for cities or a live radar image. During Winter Storms, The Weather Channel used a banner branded as "Winter Storm (name)" and below it was potential snowfall totals for cities and a future radar image. 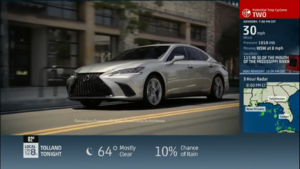